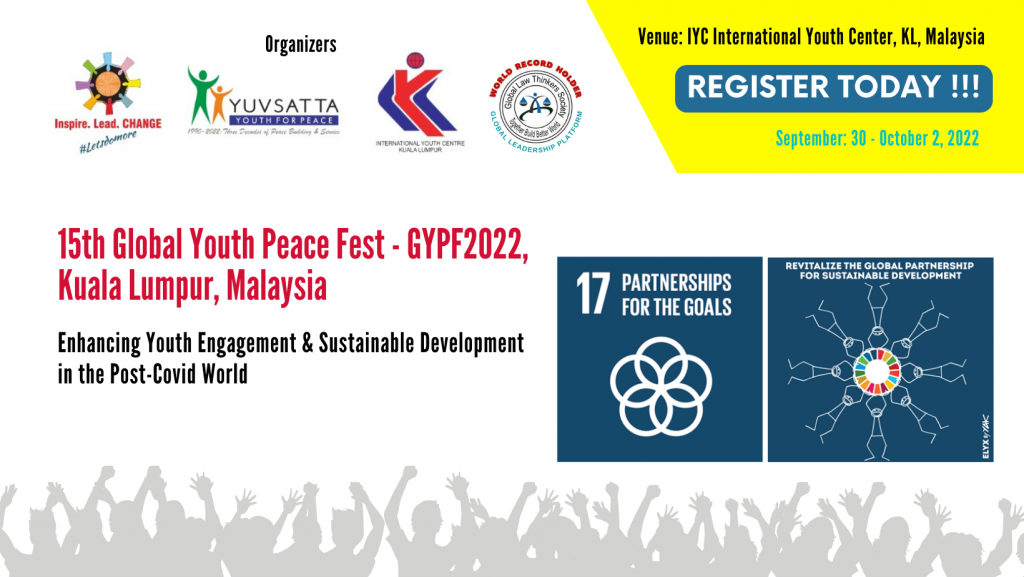 CONCEPT OF THE CONFERENCE

VISION: We envision a world where all people are equally respected, fully protected and universally realized. Included in this vision is a world where all young people – regardless of nationality, ethnicity, religion, class, gender or other differences - are encouraged and empowered to non violently claim their own rights and serve as advocates for the rights of others.
MISSION: We believe there are capable young leaders in every global community, who can become catalyst or 'Agents of Change'. Bringing those leaders together to inspire change is the mission of annual Global Youth Peace Fest-GYPF.

INTRODUCTION: Young people around the world remain optimistic that an inclusive, resilient recovery from the COVID-19 pandemic is possible. With creativity and dedication, they are helping develop solutions to make sure communities emerge from the pandemic stronger than before. No doubt it is young people who have experienced the brunt of the pandemic's impact worldwide. As Dr. Tedros Adhanom Ghebreyesus, Director-General of the World Health Organization ( WHO) said "Young people are less at risk of severe disease and death from COVID-19 but will be the most affected by the long-term consequences of the pandemic, which will shape the world they live and work in for decades to come,".
Yet, despite these troubling trends, young people have also been an energetic force at the forefront of developing creative solutions to an inclusive, sustainable pandemic recovery. At GYPF 2022, the organizers would like young people to have a role in every possible element that exists: advocacy, policymaking, research, environment, gender-across every possible angle". GYPF 2022 will brings together young people from diverse backgrounds, religion and nationalities to discuss their experiences and propose solutions for youths, by the youths.
This is a platform for increased cross-fertilization of ideas. So that they become true global citizens in thinking and action and volunteer to co-create a future equal to their vast potential. The organizers assume that the continuity of organizing GYPF will prove infectious and it is definite to spurt similar sprouting elsewhere.


BACKGROUND: It was significant that the year 2000 had been designated by the United Nations as the International Year for the Culture of Peace. The Euphoria generated during this period and concerns that were expressed also affirmed growing concern over the consumerist culture, dwindling moral values, disregard of human concerns and widespread environmental degradation. At that time various international initiatives were taken to involve youth. It was a fact that youth are not being effectively involved. Mahatma Gandhi who emphasized the importance of youth being given higher roles said that a society which doesn't ensure youth involvement will have little chance of growth. And in keeping with these thoughts Yuvsatta first organized the World Youth Conference on theme of 'Millennium without Violence' in January, 2000.
This attempt of Yuvsatta to organize an international event was quite successful in which young students from 15 different countries and personalities like Sri R. Venkataraman, former President of India, Prof. BR Nanda, prominent historian and senior gandhians like Prof. KD Gangrade, Prof. N. Radhakrishnan participated. Gandhi Smriti & Darshan Samiti, New Delhi in India also published a book on the proceedings of the Conference, which later was released by Prof. Moegiadi, then Director of UNESCO, New Delhi office. An event of this scale involves lot of networking with stakeholders, logistics management and financial support, which at that time became very difficult for Yuvsatta volunteers and resultantly they were not able to make such an effort again for next six years.
But this doesn't mean that Yuvsatta volunteers remained silent in between, on the contrary they started the concept of 'Peace-city Chandigarh' with opening of Peace Clubs in Schools and Colleges of the city. Under this campaign, more than 100 “Peace Clubs' were formed in major educational institutions of tricity i.e. ChandigarhMohali-Panchkula, where in many Principals and teachers incharge of respective Schools and Colleges are dedicating their time and resources to the task of making these clubs vibrant and result oriented. Education of the peace volunteers on the positive aspect of nonviolence through constructive activities, discussions, interactions and effective dialogue is the main focus of the initiative.
In 2006, Yuvsatta volunteers once again made an attempt of organizing an international event by inviting 100 young people of India and Pakistan. This was quite successful in spreading the message that continuity in relationships is essential for better understanding and removal of misgivings. Next year in 2007 participants doubled with over 200 young people gathering from both the neighboring countries of India and Pakistan. As they were not willing to be mute witness to their futures being written and unwritten and destroyed by governments. They were not hesitant to stand up to be counted. And decided to spread their small network to young people from other countries as well, so that man-made barriers can be diminished, which in later years resulted in participation of young people from many countries around the world. Progressing well into the last edition of 14th Global Youth Peace Fest-GYPF 2019, over 250 young people from 23 countries of the world participated. We support & endorse the UN Sustainable Development Goals (SDGs).

At GYPF 2022 the focus will be on SDG 17 (Strengthen the means of implementation and revitalize the global partnership for sustainable development), which aims to reflecton opportunities to renew and integrate efforts to achieve the 2030 Agenda for Sustainable Development.'In our outdated education system that breeds competition over collaboration, educators should consider Goal 17 as a spark for a shift in mind set. Young people should learn how to develop partnerships and build collective intelligence within their classroom, local community and even international connections.

IMPACT:
1. GYPF is a catalyst for young people to get involved in their community and make a difference. Such efforts energize those who are already engaged in good causes, helping people recognize they are not alone in their endeavor. The GYPF brings everyone together and promotes new bonds beyond boundaries of race, religion and nationalities.
2. In the past 16 years GYPF have created a network of hundreds of motivated youths across the globe. From issues of environment to violence, these youths have been advocating for equal human rights and sustainability in various manners.
3. In addition, mobilizing the youth organizations/networks is an important focus of the event.
4. Now 15 years of intervention of an annual GYPF has started regular youth exchange program between young people of India with ten other countries of Bhutan, Bangladesh, China, Indonesia, Mauritius, Malaysia, Nepal, Pakistan, Russia & Sri-Lanka.
5. GYPF provides young people a platform for increased exchange of ideas, so that they become true global citizens in thinking and action and volunteer to co-create a future equal to their vast potential.
6. GYPF further energize the formation of Peace Clubs in educational institutions which not only take active part in the initiative but also spread ideas, network and campaigns for common good of all.

HOST CITY: Kuala Lumpur-Malaysia's sultry capital is a feast for all the senses. Here you'll find historic monuments, steel-clad skyscrapers, lush parks, mega-sized shopping malls and bustling street markets. Essential parts of the vibrant mix are the incense-wreathed, colourfully adorned mosques and temples of the country's Malay, Chinese and Indian communities. A reverence for these ancient cultures is balanced with a drive to be plugged into the modern world, a desire that's reflected in a creative contemporary-art and design scene, an ambitious riverbank regeneration project and dynamic architecture: the new Exchange 106 tower is taller than the iconic Petronas Towers.

Revitalize the global partnershiP for sustainable development
Previous
Next

Stay with a Positive Community

How do I complete my Registration?

Click on registration button and you can download the registration form. Read the whole form instructions. Fill & email this Registration Form to: iyckl.nageswary@gmail.com

How I can Pay Registration Fee?

*Registration fees have to be made and cleared before the closing date.

*Payment by credit card is not accepted

Yuvsatta (Youth for Peace)-an NGO is working in a variety of areas to steer the young people towards implementing Gandhian ideals of Constructive Programme based on voluntary effort and individual and community action. Yuvsatta’s work to promote the spirit of volunteering amongst the generation next, to bridge the barriers of race, colour, religion, nationalities plus fill in the gender and economic divides by
empowering the young people is more timely than ever. Each day the headlines demonstrate the human cost of this divide. Each day the hatred and distrust grow. Now is the moment to leverage this opportunity, to address this ever-more-dangerous global divide. In so many ways our world is shrinking. And there are ever-increasing opportunities to connect with people on the other side of the globe, but generally these opportunities are squandered. To create a more just world by empowering young change makers from around the globe, Yuvsatta organizes the famous annual Global Youth Peace Fest- GYPF, in which a combination of cross-cultural learning workshops, volunteer service and youth activism is aligned with the work of grassroots NGOs, policy makers, and other stakeholders.

Who are INTERNATIONAL YOUTH CENTRE-IYC, MALAYSIA?

The International Youth Centre (IYC) was formed with the support of the Malaysian Government through a Cabinet decision on 6th February 1985. IYC functions as an institution for international youth development programmes as well as a hub for international youth NGOs to establish their offices in IYC. A well-known Japanese Calligrapher, the late Tan Sri Kampo Harada donated 1 Billion Yen.