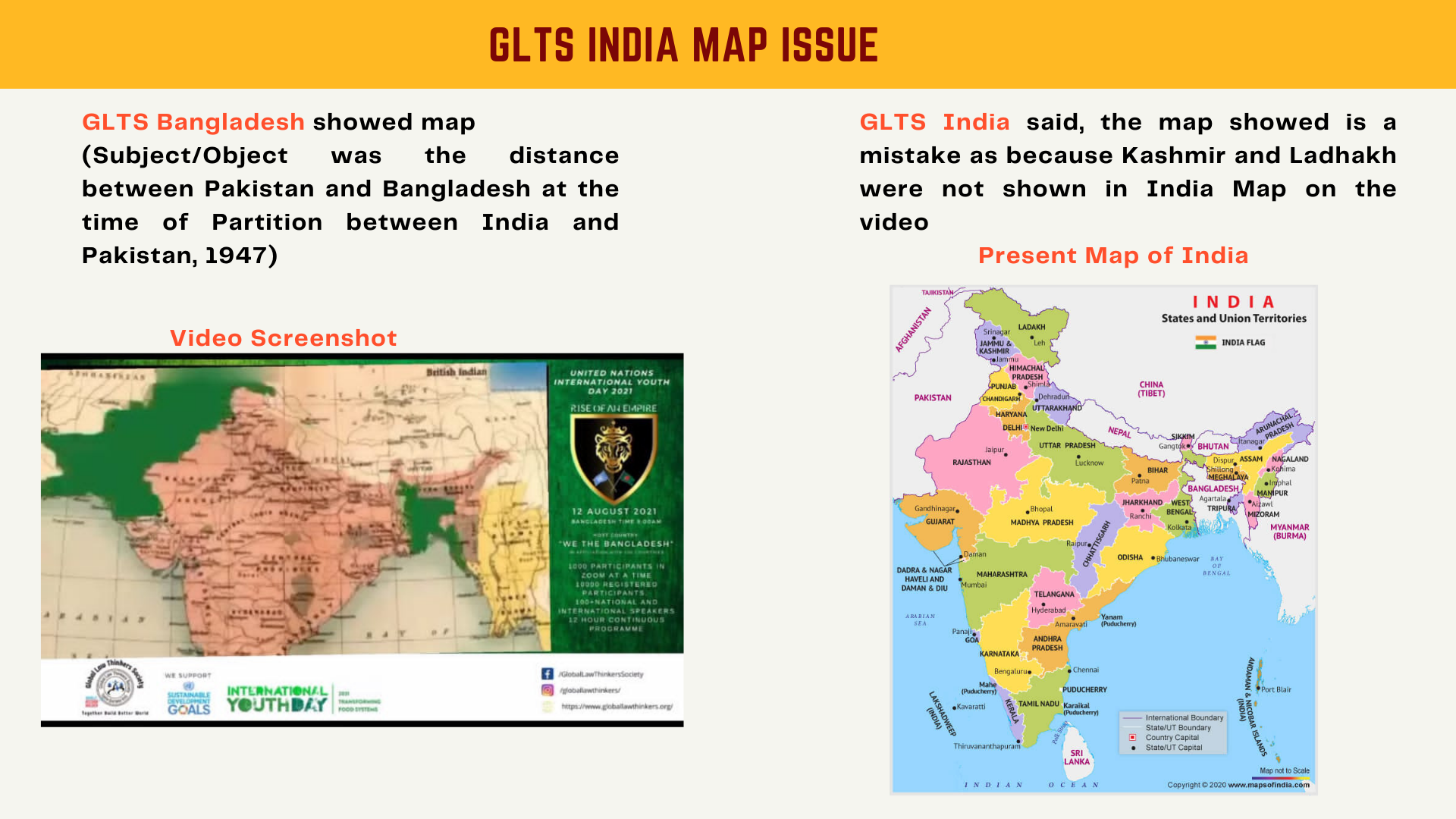 It is to inform that

But on that day a video content was claimed some mistake from Mr. Vinay Kumar Tolambia, Ex-Mentor of GLTS. He informed to write official complaint to GLTS Central and explain the mistake. Afterwards, He did not submit any complaint rather without written complaint to GLTS Central, Mr. Vinay Kumar Tolambia, with the GLTS India team created a protest and grouping (Violation of GLTS Rules), and later on, while GLTS asked to submit in written problem in video, they mentioned as follows:

“….highly sensitive mistake made in that video. The mistake is related to showing incorrect map of India at the time of partition, where after partition, two present Indian Union Territories, Jammu & Kashmir and Ladakh, both were shown as an integral part of West Pakistan and not of India.”

GLTS Bangladesh part explained about the video is that- “The video is about Bangladesh independence. And the part complained about was not showing about India or its territory/borders. Rather it was about the distance between Pakistan and Bangladesh at the time of 1947. At the time of bird view India map was there for videography beautification. Both the subject and object were about distance between Bangladesh and Pakistan and also was highlighted that only. And the video is from online sources collected map of the time of partition.” They also said, “it was not shown Kashmir is part of Pakistan”. Their initial references:

The Present Map of India:

After initial conversation with both the Countries leaders, GLTS Central created an investigation committee and instructed both the countries to create a research committee and submit their observations as above matter was not any intentional issue.

Both countries sentiment are involved, so we want to resolve it disciplined way according to the rules, regulation, guidelines of GLTS dispute resolution clauses.

For reference the video is uploaded to GLTS Official facebook with Translation, so all can understand, observe and for evidence purpose.

It is also inform that Mr. Vinay Kumar is presently Banned for bringing indiscipline, breaking peace and creating chaos in organization and also based on other complaint.

So, GLTS India and Bangladesh Network are instructed to form a short research team and appoint an expert. Both teams are given time till 30 August to issue the Research paper on the matter. Afterwards based on their research paper next steps will be taken accordingly.

GLTS doesn’t work on nationalism but on knowledge only and improving human mentality. Also a GLTS Leader means a leader without any boundary and territory, believes in unity as one and work only for positive growth of it’s member. When we mention GLTS India means the GLTS network of India and GLTS Bangladesh means GLTS Bangladesh Network. A network is connected to all other networks and unites to help each other. So, on the knowledge based part, GLTS India Network part of GLTS should issue a complete research paper with references for the map of India part you are talking about. And GLTS Bangladesh will do their part of research and both submit to GLTS Central.

From GLTS central, we apologize for this inconvenience and both parties sentimental hurt. Hope we can resolve the issue resilient and compassionate way and work together for better world.